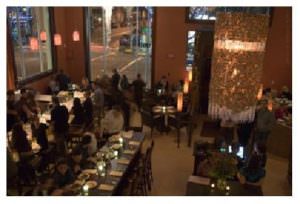 Restaurant Realty Company assisted Emily and Anjan Mitra in acquiring their first location at 995 Valencia Street which opened in December of 2005. Since then they have opened their second San Francisco restaurant, DOSA on Fillmore, in November 2008 to wide acclaim and high praise for not only their fabulous Southern Indian food but a beautiful eco -friendly space.

Emily, originally from upstate New York, and Anjan, who was raised in Bombay (now Mumbai) India, combined forces and a dream of owning a restaurant that specialized in Southern Indian food-especially the dosa-a savory crepe served with tantalizing fillings, fresh chutneys and sambar, a lentil dipping soup. The menu includes high quality ingredients that are primarily organic, bio- dynamic, free-range and sustainable. DOSA on Fillmore offers a unique cocktail program that utilizes Indian spices, house-made tinctures, nectars, cordials and bitters. DOSA is one of very few South Indian restaurants that explores all regional dishes of Southern India including non- vegetarian options. Both locations serve a brunch menu that is truly unique to San Francisco including organic egg dishes such as the Sunny Side Uttapam – a tomato, onion and green chile uttapam with two sunny side up eggs and Egg Poriyal Dosa, a flavorful South Indian egg scramble wrapped inside of a savory dosa.

Emily’s experience in working in management of a “green “ health food store  as well as working in the family restaurant business and Anjan’s love of his mother’s magical cooking gave them the impetus to open their business that soon became  and continues to be a favorite of the San Francisco culinary scene. They offer their fabulous food in hip, contemporary settings and pair the menu with a global wine list.

This has led to many accolades including being selected as one of the San Francisco Chronicles’s Top Ten New Restaurants in 2006 and in the Top 100 Restaurants for 2006, 2007, and 2008. Emily and Anjan are true success stories and we wish them well on all their future endeavors.