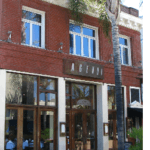 Jacek Rosicki came to this country from Poland in 1979 and landed in Long Island, New York. He started as a houseboy washing floors in a hotel and then moved to Hartford, Connecticut where he worked as a busboy in an Italian restaurant.  He then came to San Francisco and worked as a waiter at Alexis, Ernie’s and L’Etoille restaurants before starting to work in the real estate loan business in 1984. He eventually opened his own mortgage company which he had until 1989.