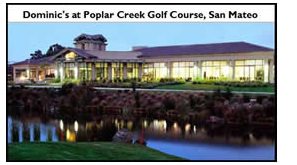 Ron started his restaurant career as a busboy at age 14 working in a restaurant in Lodi, CA that was an institution called The Cosmopolitan. From there he ended up playing professional baseball for a short stint and then Ron worked in various businesses until he opened his first business at age 27 called California Catering in Stockton. Although he wanted to study law, he was too successful in his food service endeavors to take time to go to law school. Instead Ron continued to build his food service group.

In 1999 Ron founded Dominic’s of Oyster Point named after his father who had been the general manager of Westlake Joe’s for 25 years. Building on that success Dominic’s at Poplar Creek Golf Course in San Mateo was opened in 2000. Restaurant Realty recently sold this business for Ron. In 2001 Oyster Point Hotel’s restaurant and banquet facility was added to Ron’s operation. In 2004 Moore’s Riverboat of Isleton became part of his business.

Today Ron and his son Chris oversee 260 employees in their diverse operations. To Ron the most important part of his business is providing excellent customer service that leads to customer satisfaction. He feels that any business enterprise must include not only pleasing his customers but having a good relationship with his landlords.