Join us for Ep#9 of the
🎙The Restaurant Dealmaker Show🎙

Meet Restaurateur Sondra Bernstein, founder of girl & the fig in Sonoma, the fig café & winebar in Glen Ellen, a unique event space known as Suite D with a full-service catering company, author of two books, and former co-host of a weekly podcast called The Bite Goes On.

Sondra is the founder of the girl & the fig in Sonoma, the fig café & winebar in Glen Ellen, and a unique event space in Sonoma known as Suite D with a full-service catering company. She is the author of the girl & the fig Cookbook and Plats du Jour: the girl & the fig’s Journey through the Seasons in Wine Country and was a co-host of The Bite Goes On podcast talking about all things food. In addition to these businesses, The Sonoma FIG Foundation Fund was established in December of 2016. The Fund offers grants to nonprofit organizations that help startup entrepreneurs with funding in food, farming, food media, wine and spirits, restaurants, artisanal food production or new projects for existing businesses.

Over the past twenty-four years the girl & the fig has made its mark in Wine Country and has been a longtime favorite for both locals and visitors to the area. In 2012, Sondra was celebrated as “Person of the Year”, alongside partner John Toulze by Hospice du Rhône, an international vintners association at their 20th anniversary event for their commitment to promoting Rhône wines. In 2016, she received the Lifetime Achievement award from The Rhône Rangers for the same efforts.

One sure thing that can be said about Sondra Bernstein is that, as an authentic Restaurateur, her restaurants were created as a true expression of her personality. Sondra stepped back from operations last year to revisit her passion for the arts. She is spending her time creating digital art, AI collage, building in the metaverse and curating art exhibits for artists all over the world.

Hear about Legal Counsel for Restaurant Owners with Brick & Mortar Legal’s Jordan Ries Cohen
WATCH on Facebook or get Ep8 on Demand HERE!

Our next show is
Thu, Oct. 27, 2022 with
Restaurateur Sondra Bernstein, founder of girl & the fig in Sonoma

Can’t make it but want to know about future ones?
Sign up below to get notified!

Now celebrating our 26th year, Restaurant Realty Company® has a successful track record helping over 3,000 clients in completing Hundreds of Millions of Dollars of Business and Real Estate Transactions including the following: Selling/leasing over 1,500 restaurant, bar and/or nightclub businesses, Selling over 60 related commercial buildings,  Leasing over 3 Million square feet of commercial space and Completing over 5,000 valuations. The majority of our staff have either owned and/or managed restaurants. Our deep experience as operators means we understand your business from the inside out. Restaurant Realty has Closed Escrow and/or Leased 180+ Deals during Covid! For more information, please visit www.restaurantrealty.com. 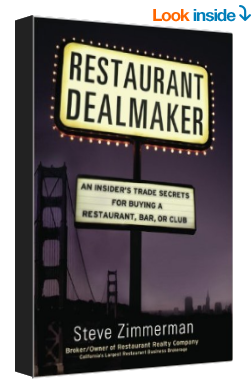 Restaurant Dealmaker: An Insider’s Trade Secrets For Buying a Restaurant, Bar or Club

Learn my trade secrets from being a front-line restaurant, bar, and club owner/operator, as well as my extensive experience as a buyer and seller of many restaurants, bars and clubs.

Launched in January 2022, the Restaurant Dealmaker Show has yielded 18,000+ views of its 8 episodes between live in-person Zoom webinars, broadcasting live to Facebook and replays on YouTube and Facebook.

Steve is the Founder, Principal Broker and Chief Executive Officer of Restaurant Realty Company. Steve has personally sold/leased over 1,000 restaurant, bar and/or nightclub businesses and many related commercial buildings totaling 2+ million square feet of commercial space, collaborated with over 2,000 clients and completed over 3,000 valuations since 1996.His real estate experience also includes sales, acquisitions, management and ownership of numerous properties throughout California including restaurants, hotels, apartment buildings, single family houses, an office building and a multi-use retail building. Steve is also the author of Restaurant Dealmaker – An Insider’s Trade Secrets for Buying a Restaurant, Bar or Club available on Amazon.

Prior to starting Restaurant Realty Company Steve had over 20 years of restaurant experience and was President and Chief Executive officer of Zim’s Restaurants, which was one of the largest privately owned restaurant chains in the San Francisco Bay Area. READ Full Bio | HIRE as Expert Witness

INTERESTED in a being a guest? Reach out to Producer Jeremy Broekman at Jeremy@restaurantrealty.com.